Pennsylvania Governor Comes Out in Support of Marijuana Legalization

Pennsylvania Governor Tom Wolf says he now favors the legalization of marijuana for recreational use, and he wants state lawmakers to consider it. This week, Wolf released a report pushing for the state legislature to create a bill legalizing recreational cannabis.

“We now know the majority of Pennsylvanians are in favor of legalization, and that includes me,” stated Gov. Wolf in a press release.

Today I’m with Lt. Gov. @JohnFetterman to call for legalization of recreational marijuana in PA.

John traveled to all 67 counties to find out what Pennsylvanians think about legalizing recreational marijuana, and many want legalization. pic.twitter.com/Re86OInfEL

According to local news reports, Wolf’s announcement shows a shift in his position on legalizing recreational cannabis. CBS Pittsburgh reported that the governor’s views on cannabis began evolving last December when Wolf signaled that he was open to looking at the matter. 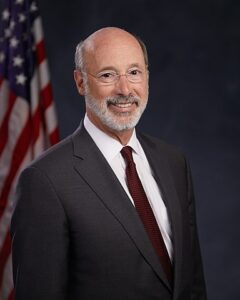 Two other actions were called for by the governor in the cannabis report. One involved the decriminalization of nonviolent and small marijuana offenses. The other action includes taking steps toward restorative justice by expunging past nonviolent and simple marijuana-related convictions.

“I look forward to seeing what we can accomplish together, especially the criminal justice reforms I am proposing today, which will have an immediately positive influence on thousands of families across Pennsylvania,” Wolf stated.

The report released on Sept. 25 was based on opinions and feedback received during a statewide recreational marijuana tour by the state’s Lt. Gov. John Fetterman. During his 98 days of travel on the “Statewide Cannabis Listening Tour,” Fetterman visited each of the 67 counties in the state to speak with residents about their thoughts on recreational cannabis.

State officials recorded comments via remarks and comment cards received at tour stops, in addition to all other comments received by Fetterman’s office in various formats to create the full cannabis report. State officials also created an online form on the governor’s website.

During the cannabis tour attendees were asked to vote by a show of hands if they supported cannabis legalization. In nearly all counties, a majority of attendees favored legalization. The report also revealed that residents expressed “near-unanimous support for decriminalization and mass expungement of non-violent and small cannabis-related offenses,” according to the governor’s press release.

The full Cannabis Listening Tour report can be found here.

While recreational cannabis is currently illegal, Pennsylvania has made strides towards legalization in the last several years. The state decriminalized possession of a small amount of cannabis for personal consumption.

Wolf may face a challenging uphill in his effort to get recreational marijuana legalized in Pennsylvania. The state’s House Republican Leadership team has already issued a statement conveying it has no intention of supporting Wolf’s marijuana push.

“We are disappointed and frustrated Gov. Wolf would promote recreational use of drug classified as a Schedule I narcotic by the federal government,” the House Republican Leadership team wrote.

“Our caucus has no plans or interest in legalizing recreational marijuana,” they concluded.

Learn more about recreational and medical marijuana laws in the U.S. through our Marijuana Legalization Map.