Researchers Explore History of Marijuana, Including Its Arrival to the Americas

The new study assesses humanity’s relationship with marijuana throughout history.

A new study published in the Journal of Ethnopharmacology offers a comprehensive look at humans’ use of cannabis, from ancient times to current day.

Researchers from the University of Brescia in Italy and the Karolinska Institutet in Sweden compiled and reviewed earlier studies as well as international scientific databases, books, Master’s and Ph.D. dissertations, and government reports with the goal of examining humanity’s relationship with cannabis throughout history.

The objective of the study was to evaluate cannabis’ “ethnological, botanical, chemical and pharmacological aspects” to promote further research into its therapeutic potential.

“We believe that this review will help lay the foundation for promoting exhaustive pharmacological and pharmaceutical studies in order to better understand the clinical relevance and applications of non-psychoactive cannabinoids in the prevention and treatment of life-threatening diseases and help to improve the legal status of C. sativa,” the study concluded.

Here’s a brief look at some of what the study found.

When Cannabis Got its Name

According to the researchers, the term “Cannabis sativa” was coined by Swedish botanist, physician, and zoologist Carl Linnaeus — known as the “father of modern taxonomy” — in the middle of the 18th century.

Scientists believe that cannabis was first domesticated in Central and Southeast Asia around 8000 B.C. With the plants’ potential therapeutic properties unknown at the time, it was primary cultivated and harvested for manufacturing textiles. The plants’ fibers first appeared in Taiwan, where archeologists discovered basketry made using cannabis.

“In fact, it has been referred to as the oldest known cultivated fibre plant and even today it is used as a constituent of fishing nets,” the researchers wrote in the study.

Eventually, cannabis was used for religious, medicinal, and recreational purposes.

The researchers found that cannabis is referenced in a wide array of ancient religious texts. In the Old Testament, marijuana is described as an “incense and sacred oil.” Hinduism and Tantric Buddhist texts, according to the study, suggest that cannabis was once thought to “facilitate the meditation and communication with the spirits.”

Marijuana’s use for medical purpose appears to date back about 5,000 years ago in China. Emperor Chen Nung, acknowledged as the “father” of Chinese agriculture, included cannabis in the first Chinese pharmacopeia, specifically calling out its use for addressing “fatigue, rheumatism and malaria.”

The scientists suggest that the recreational use of marijuana was discovered by accident, after natural events caused the plant to burn and reveal its “psychotropic nature.”

Cannabis’ Arrival to the Americas

According to the study, cannabis came to America’s shores for the first time with the arrival and settlement of the first colonists from Europe.

At the time, cannabis was harvested and cultivated primary for its fibers, one of the most valuable parts of the hemp plant because of their strength and durability.

Laws restricting cannabis use began in 1484 when Pope Innocent VIII issued a public decree (“papal bull”) called “Summis desiderantes” that denounced the use of marijuana. The papal bull specifically labeled cannabis as an unholy sacrament, and issued a ban on its medicinal use.

It wasn’t until the 20th century, however, that the most significant prohibitionary policies were implemented. In 1937, the United States passed the “Marijuana Tax Act,” which imposed tax on the sale of all cannabis – both hemp and marijuana. Then, in 1971 in the United Kingdom, Parliament passed the Misuse of Drugs Act, banning the use of marijuana for medical purposes there. 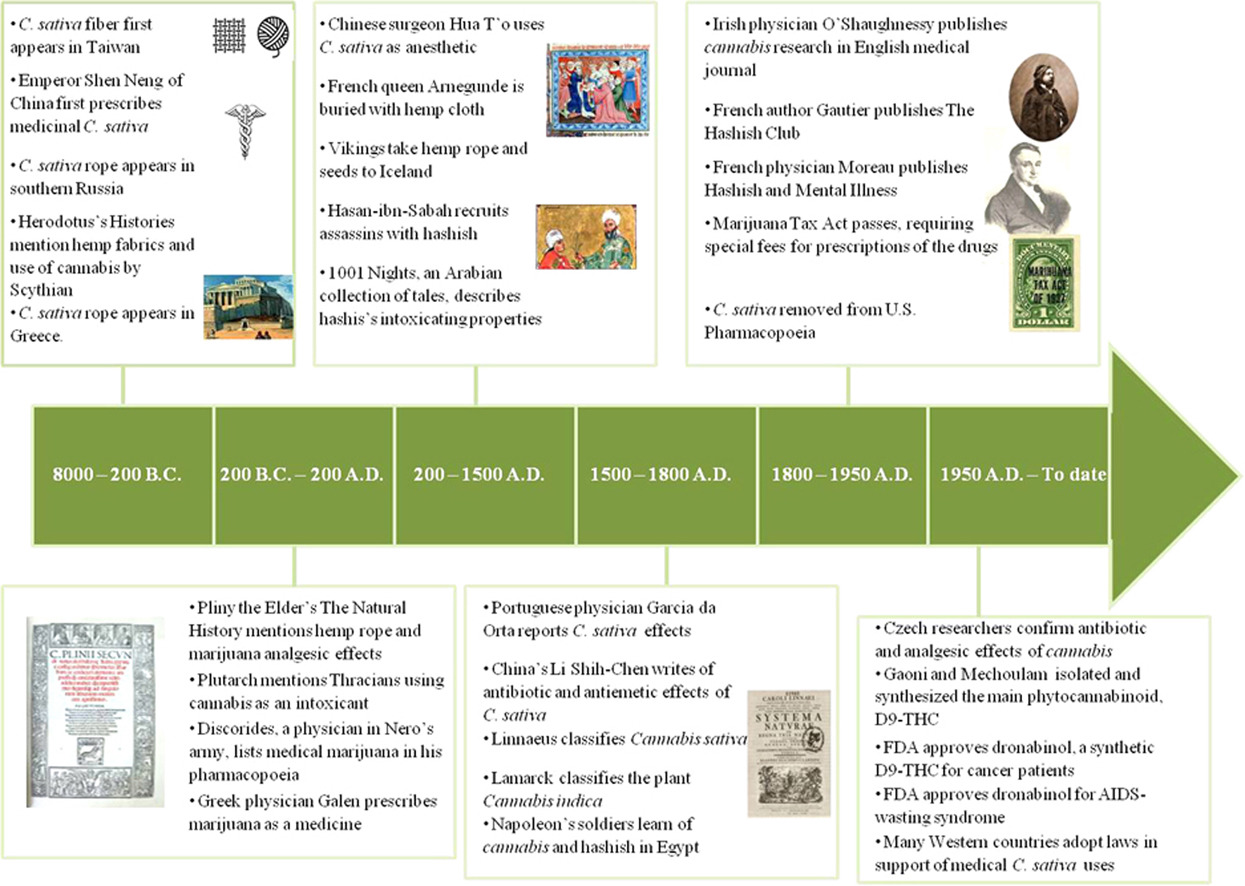 You can access the full text of the new study, “Cannabis sativa: A comprehensive ethnopharmacological review of a medicinal plant with a long history,” through Science Direct.

You can learn even more about the history of cannabis, including its legal history throughout the U.S. and around the world, as well as a look back at the ailments that have qualified for legalized medical marijuana use in the U.S., through our Cannabis 101 page.

Stay up on the latest cannabis-related research findings by regularly visiting our news page.