Washington Governor to Pardon People with a Past Marijuana Conviction

Around 3,500 adults in Washington can now apply for a pardon for a past marijuana conviction through the governor’s website.

Washington Gov. Jay Inslee on Friday announced that people who have a misdemeanor marijuana possession conviction on their record are now eligible to receive an expedited pardon.

Adult use marijuana has been legal in Washington State since voters passed Initiative 502 in 2012. The law allows adults 21 and older to possess up to 1 ounce of marijuana, and consume it in private. 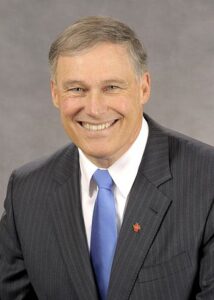 During a speech at an annual event for The Cannabis Alliance, Inslee said his new Marijuana Justice Initiative will provide pardons on an individual basis to adults with a single misdemeanor conviction for marijuana possession between 1998 and 2012 on an otherwise clean record.

“We shouldn’t be punishing people for something that is no longer illegal in Washington state,” Inslee said in a statement. “Forgiving these convictions can help lessen their impact and allow people to move on with their lives. It’s a small step, but one that moves us in the direction of correcting these injustices.”

The expedited process in Inslee’s initiative allows adults eligible for a pardon to skip the step of making a request to the state’s Clemency and Pardons Board. Individuals only need to fill out an online petition on the governor’s website to get the record cleared.

According to the governor’s office, about 3,500 people are eligible for pardons under the initiative.

Power of a Pardon

A pardon removes the conviction from publicly available criminal history reports, according to the governor’s office. The Marijuana Justice Initiative is meant to ease the burdens people face from having minor criminal records.

Even minor marijuana-related convictions on a person’s record can hinder their ability to find employment, housing, and loans, and to utilize some services.

Individuals given pardons are still not legally allowed to state on job applications that they haven’t been convicted of a crime. They can, however, say that they have been pardoned.

“A successful pardon of marijuana possession conviction can assist with barriers to housing, employment and education,” reads the governor’s website. “This will help people move on from a past mistake and toward a better life.”

The governor’s office also noted that a pardon does not vacate or seal a person’s criminal conviction. A marijuana possession conviction will still be visible to law enforcement. A person must seek relief directly from the court to have a conviction fully vacated.

Our #MarijuanaJustice Initiative aims to pardon those who have a single conviction for adult misdemeanor marijuana possession. While there are over 200K marijuana convictions in WA, this effort allows us to take the first steps to address some of those now. Let’s keep going.

Washington was one of the first states to approve legalizing marijuana for recreational use, along with Colorado. Since then, eight states have followed suit.

As more states have eased cannabis laws or legalized marijuana, several counties and cities have simplified the process of clearing convictions. Inslee’s plan seems to be one of the first to create a streamlined process for pardoning past marijuana convictions statewide.

You can learn more about marijuana laws throughout the U.S. by visiting our education page.

Stay on top of the latest cannabis industry news through our news page or by connecting with us on Facebook and Twitter.